For the second year in a row, Manna organized our “Heroes Against Hunger” reception on April 7 at VisArts in Rockville. We picked the theme of heroes because we are fortunate every day to see heroism in action.  We see it in the 3,700 families we serve each month, who struggle with not always knowing where their next meal is coming from; We see it in their neighbors, who volunteer their time in our warehouse and at our grocery store tours; we see it in the faith based groups, schools and businesses that organize food drives;  We see heroism in our Board, some of who have personal stories of needing the support of free and reduced meals at school or food stamps during a family crisis.  We often say at Manna that no one agency can end hunger.   We also see heroism in the actions of our peers, like the staff of Shepherd’s Table and MCCH, who worked through the winter blizzards determined not to close their doors to the homeless.

At our reception, we spent an evening celebrating those types of heroes as well as two special guests. 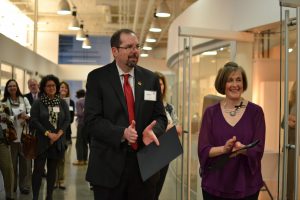 Back in 1983, Manna Food Center was founded by the community and Giant was present at the creation as our first food donor. They started us off with 16,000 pounds of food. These days at 6:30 a.m. our drivers head out for their daily rescue of food from dozens of Giants.   Giant was a role model for the community because now Manna rescues from every major supermarket chain in the County.

Giant also hosts every fall our annual Community Service Week food drive and every Dr. King weekend you can see students, civic leaders and average citizens participating in food drives at all 27 Giant locations in the County to help us stock our shelves for the winter. This spring, April 23-24 and May 7-8,  Giant will be hosting food drives at a dozen stores conducted in partnership with the Montgomery County Muslim Foundation.

Whenever Giant hosts a food drive, I make a point of popping in at stores and I’m often so pleased by how the Giant staff embrace these community events. I go up to the customer service desk and staff, see my Manna nametag and always know who we are and what we are about.   I particularly get a kick out of the store managers who have friendly competitions to see which store can collect the most food by encouraging their shoppers to give generously.   We were proud at HAH to present Giant Food with our first Corporate Hero Against Hunger award.

Just as no one agency can end hunger, even more so, no one sector alone—not corporations, not the government, not all the nonprofits put together can end hunger by themselves. It is a community effort.  As was recently discussed at Impact Now in Silver Spring, it will take a community effort to share prosperity, to create an abundant community.  It will take authentic, courageous, collective work.

But like most things in life, there is a paradox. It is also true, that businesses, governments, neighborhoods are made up of people, of individuals, and it is very appropriate to raise up the example of outstanding individuals to celebrate what they do in and for their communities.  That’s why Manna presented, Shondra Jenkins, our Hero Against Hunger award tonight.

When I first came on board at Manna, Shondra popped in with a donation, and it was clear that she was a familiar face and that she kind of knew her way around our big warehouse. That’s because for many years, Shondra has been contributing in many ways to Manna’s work, particularly our fight against childhood hunger.  In fact, she and her husband, helped us start a weekend bag initiative, now known as the Goldberg Smart Sacks program,  which helps feed low-income kids and their families every Friday of the school year.  She and Greg helped us design the program to be a true community partnership between Manna, Montgomery County Public Schools, and a sponsoring agency, the first one was Greg’s credit union.  What started out at one school, Summit Hill Elementary back in 2005, is now in 60 schools with more than 50 partners such as congregations, corporations and civic organizations, who work together to reach 2,491 students each week and provide tasty, well balanced food for their families.

Manna has taken a leadership role in organizing a coalition of other nonprofits who have replicated the model and together we’ve establish a goal of doubling the number of school children who receive bags throughout the county. We make those ambitious goals because of the original inspiration Shondra and her family provided.  In fact, Shondra’s mom, Elaine, has been known to drop off food at the warehouse.  Just last week Shondra’s son, Tyler asked for a tour of Manna because his mom was talking to him about food recovery as a way to help end hunger over a family dinner.

Shondra’s family is an inspiration and she also did serve on our Board of Directors as a representative of the Sodexo corporation. These days Shondra is an important advisor to me, especially with strategic work with our Community Food Rescue initiative as our County works together with food donors, food assistance organizations, and food runners, to increase the amount of food recovered in Montgomery County by 20%.   I am so appreciative of the leadership she shows Manna and the entire movement to end hunger.   I’ve seen Shondra in action at national conferences and she is an expert, a networker, and an inspiration.

As the 2016 Individual Hero Against Hunger, Shondra is a great role model to us all and she takes her places among many others in the community working to make Montgomery County Hunger Free. We salute her and all of you, our Manna Food Center supporters.